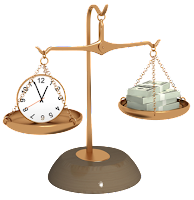 SAFe provides some wonderful yet daunting guidance when it comes to funding and the application of Lean Budgets.   As of SAFe 4.6, we have 3 key tenets of Lean Budgeting:


My purpose in this article is not to restate the SAFe recommendations.  They’re well documented at in the Lean Budget article.  As always, however, I’d rather talk practice than theory – in this case in the area of “Fund Value Streams, not projects”.

In summary, the theory is that we provide guaranteed funding to establish a standing capacity (in the form of an Agile Release Train), then use a combination of “guardrails”, Epic level governance and Product Management accountability to ensure that this funded capacity is well used (building valuable features) and tune it over time based on results achieved.

When I take a room of leadership through this approach its usually pretty confronting, and often provokes strong reactions.  Then I share a story from an early SAFe implementation.  It was with an organization that didn’t have Lean or Agile friendly funding, we just had a stable ART with stable teams that were fed by projects.  And we built a record for “100% on time/on budget”.  We did it in a very simple way.  When something was delivered under budget, we still charged the quoted price, and as such we were able to build up a buffer fund.  When something ran over budget, we drew down on the buffer fund.  It was closely managed, and it all came out in the wash!  By the conclusion of the story, that same room who was reacting strongly a few minutes earlier is suddenly grinning (in some cases rather nervously).  I’m pretty sure every organization I’ve worked with in the past 10 years has survived historically using some variation of this technique.

Some SAFe implementations are lucky enough to start with capacity funded ARTs fully following the framework guidance, but in most cases they’re still realistically project funded.  It’s either a really big amorphous project being used as a masking umbrella to the standing funding model, or quite literally the single ART is being funded by numerous projects and needing to charge back.

And to take it a bit further, even if we are capacity funded we usually need more granular data on how the money is spent.  At minimum, we generally have some work which is Opex funded and some Capex funded.  We also want some data on how much our features are costing.   Hopefully we’re not falling into the trap of funding feature by feature, but when your ART is costing $3-5M per PI the organization will require us to be able to break down where those millions are going.

About now, the timesheet police come out!  Somebody somewhere figures out a set of WBS codes the ART should be charging against (I recently heard an example where a theoretically capacity funded ART had up to 15 WBS codes per Feature), and everyone on the ART spends some time every week trying to break up the 40 hours they worked across a bewildering array of WBS codes that will then be massaged, hounded and reconciled by a small army in a PMO.

There’s a much simpler, less wasteful way.  We’ve used it time and again, blessed by Finance department after Finance department – once they understand the SAFe framework.  I’m going to start at the team level, then build it up to the ART.

We usually work this on a “per Sprint” basis, and need to know two things:


What did the team cost?

Figuring out what the team cost should be straightforward.  Given that we know if you’re part of an Agile team you’re 100% dedicated, all we need is your daily rate and the days you worked.  Specifics of how this daily rate is calculated for permanent employees versus contract/outsource vary too much to provide specifics, but for each of your agile teams you should know your “burn rate per sprint”.  You then need a way of dealing with leave and (hopefully not) overtime.  We’re not trying to totally kill timesheeting here, but we can be much more simplistic about it.  Each team member should only have one WBS code to allocate their time against – the one that says “I worked a day as a member of this team”.  Thus, using your knowledge of burn rates and actual days worked you have total cost for the team for the sprint.

What did they work on?

If you’re part of an Agile team, the only thing you could possibly work on is your backlog!  So, we know that the entire team cost should be allocated against their backlog.  From  a funding perspective, aggregating this is based on effective categorization of backlog items: by parent Feature, item type or both.  Consider the following example:

The Sprint in Aggregate


If your world can’t cope with ragged hierarchies, you can create “Fake Features” for the purpose of aggregation.  I quite commonly see features like:


The richness and detail of your aggregation basically depends on your “Story Type” classifications.  For example, typically work done on exploration/discovery can't be capitalized, which would lead you to introduce a story type of “Exploration”.

Dealing with the naysayers

At this point, some people get worried.  The size of the stories was estimated, not actual.  What happens if Story 1 was estimated as 3 points and was actually 5?  What about stories that didn’t get accepted?  Can Fibonacci sizing really be accurate enough?  Our old timesheets recorded their time spent against different activities in minutes!

It’s time for a reality check.  I’m going to illustrate with a story.  I was recently facilitating some improvement OKR setting with the folks responsible for timesheets in a large division (still mostly waterfall).  One of the objectives they wanted to set involved reducing the number of timesheet resets.  I asked what a timesheet reset was and why it was important to reduce them.  Turned out it was when a timesheet had been submitted and was some way through the approval process when they realized there was an error and it needed to be reset to be fixed and resubmitted.  Obviously, this was a pain.  I asked them how often it happened and why?  The response: “Usually when there’s a public holiday we get a lot of them.  Everyone enters 8, 8, 8, 8, 8 (hours worked) and the approver approves on autopilot then half way through their approval run remembers the public holiday!”

Everyone (and most especially finance) knows timesheet data is approximate at best.  The person filling it out knows they worked 8 hours, guesses their way through how much they spent on what, and finds whatever hours are left unaccounted for and chooses something to attach them to!  And the person approving it does little review, knowing they have no meaningful way to validate the accuracy.

While the backlog aggregation will always have a level of inaccuracy, few will argue that it is any less accurate than the practices employed by their timesheet submitters (unless you’re a law firm steeped in the 6-minute charging increment).  And at this level, your CFO should realize that any variation is not material to the overall investment and is accepted under GAAP (General Accepted Accounting Principles).

Moving from Team to Train

On the surface, life gets a little more complex moving from team to train.  You have lots of people in supporting roles not necessarily working on specific features.  Again, however, it’s not all doom and gloom when you look at prevailing practices.

In many an IT organization, pre-Agile daily rates attract a “tax” used to cover the costs of those less directly attributable such as management, governance, QA teams and the like.  Every project they’ve ever estimated has attracted a percentage surcharge (or a series thereof).

In the same vein, we can calculate a “burdened run rate” for the teams.  We do this by taking the burn rate for every member of the ART not associated with a delivery team, summing them, then distributing them across the team burn rates.  In theory, they exist because the teams couldn’t be delivering value without them – so they must be contributing in some fashion.  Consider the following example: 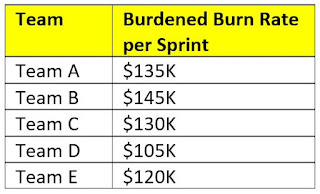 This becomes more nuanced in the case of a support team who does directly cost attributable work.  The classic example is the System Team.  They should be spending a certain percentage of their capacity in general support and the rest building enabler features (hopefully DevOps enabler features).  In this case, we can use the team-level backlog aggregation approach illustrated above provided we can see their support work clearly categorized so we know which percentage of their cost to distribute to burdened burn rates and which percentage to attribute directly to features.

All that remains is for our supporting staff to timesheet against a temporary “I worked on this ART WBS”, and we have the means to attribute our costs at the ART level just as we did for the team.

We get one other thing for free.  I like the word "Burdened" when it comes to burn rates.  There's usually a world of potential waste to be eradicated in burden costs.  Calculating some heuristics allows your CFO to start asking some rather pointed questions about whether ARTs are really "running lean".

I work with one small client who has none of the “enterprise fiscal responsibilities” of most SAFe implementations.  In theory, they have no need for any of the above discipline and in fact ran their early implementation without it.  But then they wanted to start analyzing cost/benefit on the features they were building.  In fact, it was the delivery folks who wanted to know the answers so they could change up the cost/benefit conversations when feature requests came in.

I don’t think it matters how “ideally Lean or Agile” you are, if you’re in the type of enterprise using SAFe you will need to be able to allocate your costs across Opex and Capex, and need to analyze your Feature costs to tune your investment strategy and provide data to your improvement initiatives.  The techniques illustrated in this article require good backlog discipline and some walking through to get blessing from your Finance departments, but they’re far from rocket science.  And best of all, they work regardless of whether you’re project funded, capacity funded, or some combination of the two!

Because, in the end, I have one experience with Leaning up governance.  Until you have a viable alternative that enables the organization to fulfil its fiscal and governance responsibilities you’ll never dislodge the onerous, wasteful practices of the past.

Posted by Mark Richards at 2:31 AM