I’ve been working on an article about the SAFe Program Kanban, and found myself mixing in a number of basic Kanban techniques. As I read through the (overly lengthy) first draft and realised the fuzzy focus being caused by a mix of “Kanban 101” and “Program Kanban”, I found myself reflecting on the fact that a lot of people kind of “fall into Kanban”. The two most common cases I encounter are the dev team that evolves their Scrum implementation to the point that the arbitrary batching mechanism of the Sprint Boundary seems suboptimal and the Agile Release Train (ART) Product Management team taking their first crack at a Program Kanban. For whatever reason, many start to use it without ever understanding any of the basic tools available other than “use WIP limits”.

In this article, I’m going to cover two of the basic Kanban concepts every team should take advantage of and a third which tends to be more applicable for strategic Kanban systems than those operated at the dev team level.

One of the simplest improvements you can make to a Kanban is the separation of states into “Doing” and “Done”. This separation enables far more accurate visualization of the true state of a piece of work, adds immensely to the granularity of the metrics that can be derived, and most importantly is critical to enabling the move from "push" to "pull" mindset.
Consider the simple yet very common 2-state Team Kanban below: 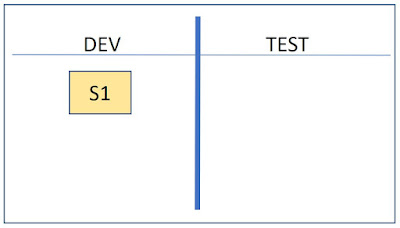 When the developer completes story S1, they will signal this by pushing it into Test. However, the system is now lying. The fact that the developer has placed it in test does not mean testing has commenced (the clue lay in the use of the word "pushed"). 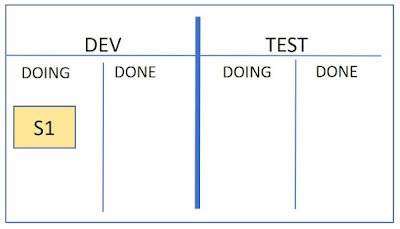 Now, when the developer completes story S1, they place it in "Dev Done". This sends a signal to the testers that when they are ready, they can "pull" story S1 into Test. If we see a big queue building in Dev Done, we can see a bottleneck emerging in front of Test. If (over time), we discover that stories are spending significant amounts of time in "Dev Done" it should trigger some root cause analysis.

You could also achieve the same effect by making a 4 state Kanban as follows:

To be brutally honest, the difference is intellectual. Aesthetically, I tend to prefer the “Doing|Done” approach, partially because it leaves me with less apparent states in the Kanban and mainly because I tend to assign WIP limits spanning “Doing and Done”. In fact, when designing complex Kanbans I will often use a mix of “Single State” and “Multi-State (Doing|Done)” columns from a clarity perspective. The “Single State” columns tend to be those in which no activity is occurring – they’re just a queue (eg “Backlog”).

The creator of the Kanban Method (David Anderson) identified 5 core properties of successful Kanban implementations, one of which was “Make Process Policies Explicit”. In designing the states of your Kanban system, you are beginning to fulfill this need by making the key stages of your workflow explicit (and supporting another of the key properties – “Manage Flow”). For the evolving Scrum Team, this is often sufficient as it will be supported by their “Definition of Done” (another explicit policy).

However, at the strategic level (or for a Kanban system that crosses team boundaries) we benefit by taking it to another level and defining “Exit Policies”. An Exit Policy is effectively the “Definition of Done” for a single state. Whilst it is up to the team member(s) (or Teams) exactly how they do the work for that state, it is not considered “Done” until it meets the exit policies for the state. These policies should be made visible as part of the Kanban design, and should be subject to review and evolution as part of continuous improvement activities. In the words of Taichi Ohno – “Without standards there can be no Kaizen”.

Every piece of information you can add to a Kanban board is valuable in conveying extra information to support conversation and insight. Most teams are familiar with the practice of creating a set of laminated “avatars” for each team member. When a team member is participating in the work on a card, they add their avatar to the card as a signal. Thus, anyone observing a Kanban and wanting to know who is working on a card gets instant gratification. Incidentally, this is for me one of the biggest failure areas of digital Kanban boards. To my knowledge, the only digital Kanban tool that supports multiple avatars on a single card is LeanKit – a very strange condition in a world centred on collaboration :)

Now to extend the concept. There is no reason to restrict avatars to the representation of individuals. If we create avatars for Dev Teams, we can (for example) understand which dev teams are involved in the implementation of a feature on a feature Kanban. Take it up a layer, and we can create avatars for ARTs and other delivery organizations. Suddenly, we can look at a portfolio Kanban and understand which delivery organizations are involved in the implementation of an Epic.

There are many more tips and tricks to creating powerful Kanban visualisations, but these are the three I find myself introducing again and again as I help Scrum teams leverage Kanban techniques and ART Leadership teams implement strategic flow Kanban systems.

Always remember, as +Inbar Oren put it so well, a good Kanban board TALKS:
Posted by Mark Richards at 4:16 AM