Recently, I’ve noticed a number of threads on the SAFe linked-in groups indicating people are struggling to get started with the SAFe “Weighted Shortest Job First” (WSJF) prioritisation model.

When I first heard +Dean Leffingwell teach the model I thought “wow, this fantastic.”  His use of a proxy model for Cost of Delay (CoD) seemed inspired.  +Don Reinertsen  had provided compelling arguments for the power of fully quantified CoD.  On the other hand, all too many people abandon all attempts to have a value discussion because it’s “just too hard to quantify”.  The 3-part proxy in SAFe seemed simple enough to enable people to begin.

The problem, I learned, was one often encountered in people digesting Don’s principles of product development flow.  It sounds like fantastic theory but the complexity makes it challenging to find a starting point.  My first breakthrough came in early 2013.  I was teaching a public Leading SAFe class, and had 5 people from one company on the same table.  While most people tackle the WSJF exercise as individuals, this group had a shared list of features and attacked it as a group exercise.  They made up planning poker cards from post-its and started voting.  As I listened to the conversation, I got inspired.  Not only did I hear a great discussion, but I could hear what they had misunderstood from the theory.

My next step was to take their example and turn it into something every class member could experience.  They’d had the benefit of a list of features all of them recognised, but this is rarely true.  For an answer, I decided to feed every group a recognisable set of things to debate for Cost of Delay.  The result was a simulation I call “SAFe City”.  The setting involves a property developer building a satellite city and evaluating the Cost of Delay of various housing estates, shops and other developments.  Initially framed at the Epic level, every group receives a list of 9 Epics to evaluate along with a good supply of planning poker cards. 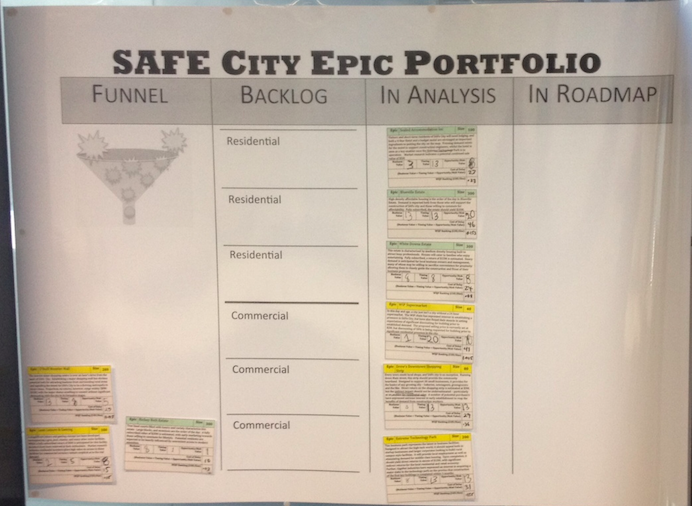 I started to run it for every class.  And the results astonished me.  Not only did it become apparent how confused people became in interpreting the theory, but I also started to understand the true beauty of the model myself.

If you’re interested in the simulation, it takes roughly 1 hour to run and debrief and all the required materials can be found at SAFe City Epic Prioritisation.  It runs perfectly well standalone, and I’ve run it with groups up to and including C-level.

The activity gives groups both the confidence and interest to take it back into their own context.  I’ve now seen numerous groups elect to adopt the model irrespective of whether the initiatives are being delivered through waterfall or agile.  In my next post I will tackle the first steps as we take it out of the classroom and into reality.