An Introduction to Objectives and Key Results (OKRs)

In late January I was working on a final draft of one of my metrics articles when someone suggested I take a look at OKRs.   I’d heard of them, but hadn’t really paid much attention other than to file it on my always long backlog of “things I need to learn something about”.  Then a couple of days later I was writing my abstract for a metrics session at the Agile Alliance 2017 conference and in scanning the other submissions in the stream discovered a plethora of OKR talks.  This piqued my interest, so I started reading the OKR submissions.   At this point I panicked a little.  The concept sounded fascinating (and kind of compelling when you realize its how Google and Intel work).  I was facing into the idea that my lovingly crafted “SAFe PI Metrics revamp” might be invalidated before I even finished the series.

So, I went digging.  The references that seemed to dominate were Radical Focus by Christina Wodtke, a presentation by Rick Clau of Google, and an OKR guide by Google.  A few days of reading later, I relaxed a little.   I hadn’t read anything that had invalidated my metric model, but I could see a world of synergies.  A number of obvious and compelling opportunities to apply OKR thinking both personally and to SAFe had emerged.

In this article, I will provide a brief overview of the concept and use my early application to personal objective setting as a worked example.  My next article will detail a number of potentially powerful applications in the context of SAFe.

As Wodtke states in Radical Focus, “this is a system that originated at Intel and is used by folks such as Google, Zynga, LinkedIn and General Assembly to promote rapid and sustained growth.  O stands for Objective, KR for key results.  Objective is what you want to do (Launch a killer game!), Key Results are how you know if you’ve achieved them (Downloads of 25K/day, Revenue of 50K/day). OKRs are set annually and/or quarterly and unite the company behind a vision”


Wodtke dials it up a notch when it comes to ambition:

I’m a great believer in experimenting on myself before I experiment on my customers, so after finishing Radical Focus I decided to try quarterly personal OKRs.  Over the years, I’ve often been asked when I’m going to write a book.  After my colleague +Em Campbell-Pretty  published Tribal Unity last year, the questions started arriving far more frequently.

After a particularly productive spurt of writing over my Christmas Holidays I was starting to think it might be feasible so I began to toy with the objective of publishing a book by the end of the year.  Em had used a book writing retreat as a focusing tool, so it seemed like planning to hole up in a holiday house for a few weeks late in the year would be a necessary ingredient but that was far away (and a large commitment) so the whole thing still felt very daunting.

As I focused in on the first quarter, the idea for an objective to commit to scheduling the writing retreat emerged.  Then the tough part came – what were the quantitative measures that would work as Key Results?  Having now facilitated a number of OKR setting workshops, I'm coming to learn that Objectives are easy, but Key Results is where the brain really has to engage.  My first endeavors to apply it personally were no exception.  Eventually, I came to the realization that I needed to measure confidence.  Confidence that I could generate enough material, and confidence that people would be interested in reading the book.  After a long wrestle, I reached a definition:

As Wodtke states when concluding Radical Focus, “The Google implementation of OKRs is quite different than the one I recommend here”.  Given that I had started with her work, I was quite curious to spot the differences as I read through Google’s guidance.  At first, it seemed very subtle.  The biggest difference I could see was that for Google not all objectives were stretch.  Then the gap hit me.  Wodtke added a whole paradigm for working your way towards the objective with a lightweight weekly cycle.   I had loved it, as I’d mentally translated it to “weekly iterations”.

The model was simple.  At the start of each week, set three “Priority 1” goals and two “Priority 2” goals that would move you towards your objectives.  At the end of the week, celebrate your successes and reflect on your insights.  Whilst she had a lot more to offer on application and using the weekly goals as a lightweight communication tool, the simplicity was very appealing personally.  After all, I had a “day job” training and coaching.  My personal objectives were always going to be extra-curricular so I wanted a lightweight focusing tool.

Whilst writing a book was not my only objective, it was one of two so features heavily in my weekly priorities.  Following is an example excerpt: 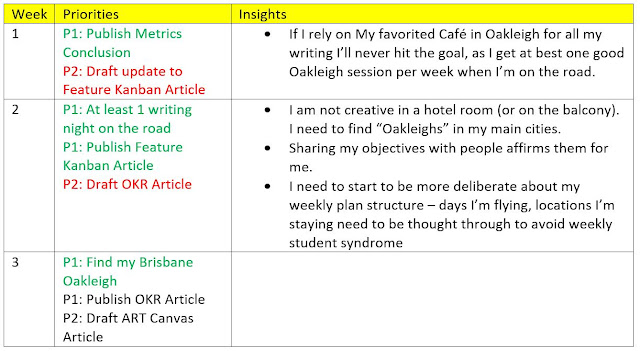 Hopefully by this point you are both starting to understand the notion of the OKR and perhaps inspired enough to read some of the source material that covers it more fully.  I can’t recommend Radical Focus highly enough.  It’s an easy read, fable style (think The Goal, The Phoenix Project).

You might have noticed along the way that my priority goal this week was to “Publish OKR article”.  As seems to happen regularly to me, once I start exploring an idea it becomes too big for one post.  I never actually got to the “SAFe” part of OKRs.  To whet your appetite, here are some things I plan to address in the second article:

Posted by Mark Richards at 7:04 AM